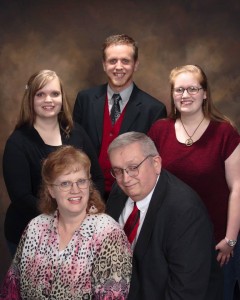 In January of 2012, Dr. Gordon Gee became our Pastor. He has pastored in Pennsylvania, and before coming to us was on staff with Dr. Terry Booher in Fort Pierce, FL.

He received his bachelor degree from Massillon Baptist College, and has furthered his education with Andersonville Baptist Seminary & Andersonville Theological Seminary.

Pastor Gee & his wife, Kathy, were married in 1986 and have 5 children and 4 grandchildren.

We believe in one God, who is eternal, self-existent, infinite, and immutable. We believe He has one nature, one essence, and one substance, yet manifests Himself to man in three persons: the Father, the Son, and the Holy Spirit (Deuteronomy 6:4; I Timothy 1:17; James 1:17; I John 4:4).

We believe Jesus Christ to be the one and only Savior of mankind. We believe Jesus Christ to be eternally God and to possess all the attributes of Deity. We believe that the Lord Jesus Christ was virgin born, that He was God incarnate, and that the purposes of the incarnation were to reveal God, to redeem men, and to rule over God’s kingdom. We believe Jesus Christ never relinquished any attributes of His Deity, but merely veiled them. We believe He lived a perfect, sinless life, at the end of which He was offered for all mankind as a substitutionary sacrifice for man’s sin. This sacrifice was a just payment to God for the forgiveness of sin. It was activated by His death through the shedding of His blood on the cross and was accepted by God upon His resurrection. We believe He ascended into Heaven after His resurrection to be seated at the right hand of the Father, waiting for the time of receiving His church at the rapture, and returning seven years later to earth to rule and reign as King for 1,000 years (Psalm 2:7-9; Isaiah 7:14, 9:6, 43:11; Micah 5:2; Matthew 1:25; Luke 1:26-35; John 1:1, 1:3, 14, 18, 29; Romans 3:19-25; Romans 5:6-15; Philippians 2:5-11; I Thessalonians 4:13-18; I Timothy 2:5; I Timothy 3:16; Titus 2:10-15; Hebrews 7:26, 9:24-28; I Peter 1:19, 2:2; I John 1:3; Revelation 20:1-6).

We believe all men were born with an inherited sin nature received from our common ancestor, Adam. We believe that because of his nature, man is a sinner by choice, and he is totally incapable of reforming himself or ceasing from his sin by his own power. We believe the only hope of deliverance for man is a total change of mind concerning his sinful condition and inability to change it, and a turning to Jesus Christ as the only Savior. We believe that only through the substitutionary sacrifice of Christ on the cross can a man be delivered from his sin. We believe that all those who reject Jesus Christ as their Savior are already condemned to an eternity in the lake of fire (Genesis 5:1-5; Acts 4:19; Acts 16:31; Romans 3:10-23; Romans 5:6-12; Romans 6:23; Romans 10:9-10; Ephesians 2:8-9; Titus 3:5-6; Revelation 20:11-14).

We believe the church began with the calling out of the twelve apostles by Jesus Christ and was empowered on the day of Pentecost. We believe the local church is God’s only institution to carry out His work today. We believe the local church is composed of members who have been saved and baptized according to the command of Christ, and have voluntarily united together for the purposes of worship, fellowship, service, and the Lord’s Table. We believe all true believers will be taken up at the rapture, just prior to the tribulation (Matthew 16:16-18; Acts 1:15; Acts 2:41-43; Acts 11:15; Acts 20:28; I Corinthians 15: 51-58; Ephesians 1:12-14; Ephesians 5:25-30; I Thessalonians 4:13-18; I Timothy 3:4-15).

We believe that the direct taking of an innocent human life is a moral evil, regardless of the intention. Life is a gift of God and must be respected from conception until natural death. Thus we believe that an aft or omission which, of itself or by intention, causes death in order to eliminate suffering constitutes a murder contrary to the will of God. Discontinuing medical procedures that are extraordinary or disproportionate to the expected outcome can be a legitimate refusal of over-zealous treatment. (Ex. 20:13, 23:7; Matt. 5:21; Acts 17:28).